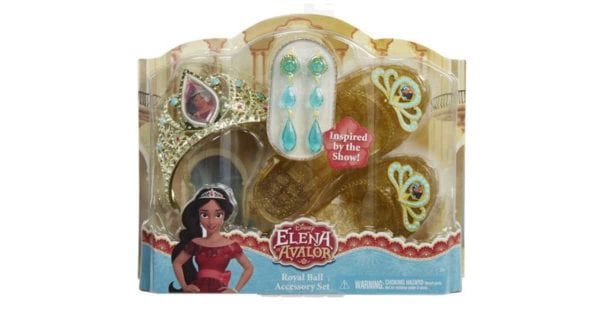 Advertisements
Disney Princess Elena Accessory Set – this set was found IN STORE at Walmart for ONLY $1! This is a clearance deal so YMMV!

Walmart.com – Your daughter will look like royalty when she dons the Disney Princess Elena of Avalor Royal Ball Accessory Set. This elegant product features earrings and a tiara with beautiful gems. It also includes Elena’s iconic shoes so she can strut around in style, inspired by the character in the Disney show. Your child can pretend to be the bold, compassionate, funny and clever Crown Princess in the Elena of Avalor accessory set.

She can mimic the character’s take-charge, adventurous spirit that empowers her to rule in her own unique way. Let your daughter turn up the adventure in the Disney princess accessory set as she pretends to be the protector of Avalor. Complete her Crown Princess Elena look as she accessorizes the fun and imagination. She can act out or sing along with the show while dressed as her favorite character.

Thank you Reese from our Walmart Clearance group for sharing!