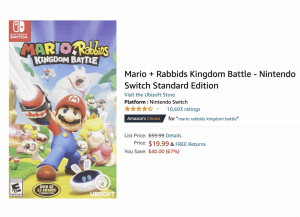 Are you looking to grab this super amazing deal on Mario Rabbids Kingdom Battle? This is a super fun game that is out for the Nintendo Switch and right now it is on sale for a super low price! If you are a huge fan of games or just a huge fan of Mario then hurry on over and grab this deal before it ends! This is a new fun game, changing the way that Mario looks! Instead, they will be battling in four worlds with combat, enemies, and puzzles! If this sounds like the game for you then hurry and check it out below!

If you are looking to grab this amazing deal then hurry on over to Amazon and check it out! Right now you can enjoy Mario Rabbids Kingdom Battle on sale for just $19.99! Normally this game is priced at $59.99! If you are a fan of mario then this is a game you do not want to miss out on! this is exclusively for the Nintendo switch! Be sure to follow our buy now button above to check out this amazing deal! Don’t miss out!